The Mantilla wedding veil is an oval veil shape, which is designed to be worn flat on the head. There is no gathering in the width of the fabric.

The traditional mantilla, also known as the Spanish mantilla worn at the top of the head, secured with a comb sewn flat to the fabric, troupe clips, or a hairpins.  A Mantilla is one layer, this veil style cannot be worn over the face.

Design features– The mantilla veil has an edging that will draw up the side of the veil. Some times clients can find this look a little over powering near their face and decide to have a mantilla effect veil. 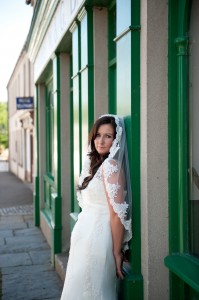 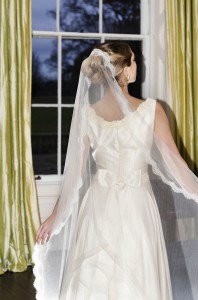 The Mantilla Effect
We create the veil shape as a centre gathered veil. The fabric is a gathered across the width of the fabric. It is then sewn onto the comb. The edging is sewn up the side of the veil and over the top of the comb creating a mantilla effect veil as shown below. 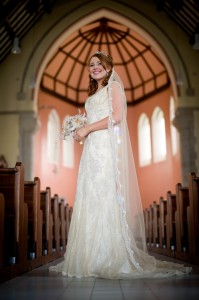 The wedding was fantastic and the veil looked wonderful. It felt great to wear.  I was thrilled with it Joanne, September 2012, UK

Just letting you know I’ve now received the veil. Its absolutely stunning…better than expected! and the lace colour is a perfect match. I have been blown away with it. Thank you so much. Kind regards, Clare, June 2013, UK

Thank you again for your craftsmanship and professional service, which helped to make our wedding day complete! Claire August 2011,Wedding Veil Testimonial UK

Thank you very much for a beautiful veil. Your veil was absolutely amazing and you will see in the photos, it absolutely just created the magical look! the veil was the magic! it was such a pleasure to work with you on preparing for the most important day of my life. As a wedding planner, if I get any clients asking about veil I will make sure that you are the first person they/I contact every time. 🙂 Adele, 2013, New Zealand, Wedding Veil Testimonials

“Our wedding in Italy went very well, thank you, and your veil had many compliments.” –Rozalind, October 2011, Italy

Just wanted to say thanks again for my beautiful veil. It was sooo perfect, I was delighted when I saw it with my dress……so much so I didn’t want to take it off on the day! Julie, October 2010, N.I.

“You are amazing…it is exactly what I had in mind…visionary is exactly what you are…really well done….even my kids love it!  An heirloom to keep for the female line without doubt….already looks as if I’ve found a gem in the attic…soooo perfect.” -Claire, December 2012, UK

Visionary Veils supplied my dream veil for my wedding in September 2017. It was EXACTLY what I was hoping for and photographed beautifully. Great service, communication, and product. Alyssa Bailey, February 2018

You can find out more about which cookies we are using or switch them off in settings.

This website uses cookies so that we can provide you with the best user experience possible. Cookie information is stored in your browser and performs functions such as recognising you when you return to our website and helping our team to understand which sections of the website you find most interesting and useful.

Strictly Necessary Cookie should be enabled at all times so that we can save your preferences for cookie settings.

If you disable this cookie, we will not be able to save your preferences. This means that every time you visit this website you will need to enable or disable cookies again.